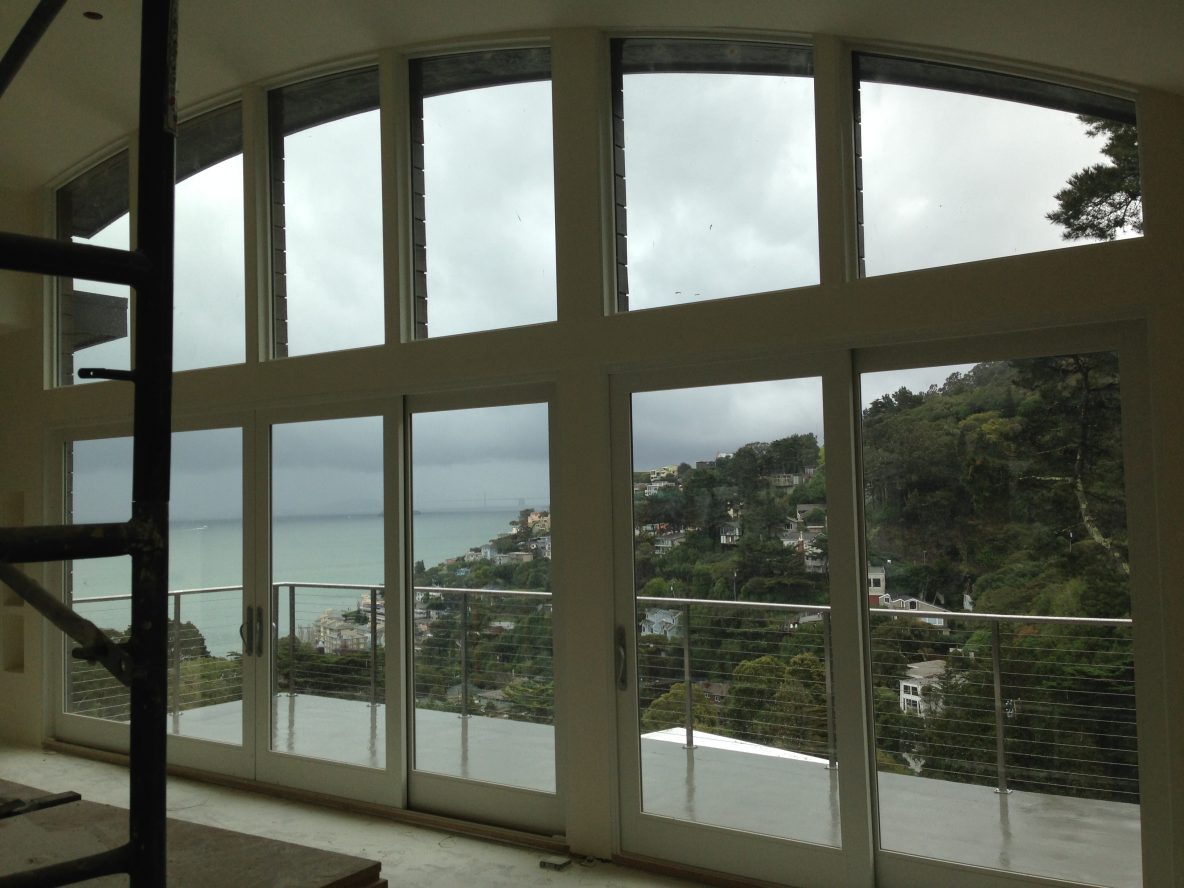 Old Town Glass furnishes windows and doors for all types of projects. Over the past couple months, we have worked on a number of projects that featured Marvin Windows and Doors, used in Modern Design. Here are a couple photos highlighting contemporary windows and doors. The projects range from Hotel and Resorts, new construction, and small remodels with window replacement.

The next photo set features Marvin Cumulus Gray Clad Windows and Doors with Square Sticking on a project that was designed and built by the owner in Sausalito, CA.  It features sweeping views of Sausalito, Tiburon, and San Francisco Bay.  To get the Marvin Windows and Doors onsite, we had to work with the owner, general contractor, and crane company to delivery each item to the correct floor.

Marvin OXXO CUSFD and Polygon Archtop with a View of Sausalito

The next set of photos feature a new construction home in Novato, CA. that was designed by Stewart Summers, Architect and built by the owner.  It features Marvin Clad  Four Panel Doors, Two Panel Doors,  and Clad Ultimate Awning Windows.

John Clarke Architects, designed the project shown below that was constructed by Tom Ganley Construction in Ross, CA.   It was a major remodel to update an existing structure.   The windows and doors have a contemporary design while blending into the natural elements of the building site. We worked with Marvin Windows and Doors in order to customize the sticking and interior trim so that all of the direct glazed (fixed units) have matching interior glazing stops to the Marvin Pushout Casements used throughout the project.

The complete renovation of the Historical Mansion at the Casa Madrona Hotel in Sausalito, featured the addition of a Modern Suite below the Mansion.  Marvin Windows and Doors were used throughout the structure, including historically accurate Clad Ultimate Insert Double Hungs with Ogee Lugs.   The lower floor featured a combination of Marvin Clad Ultimate Double Hungs and Direct Glazed Polygon Corner Units and Ultimate Casements.  The below photos shows the sweeping view of San Francisco Bay, Marin County, and the East Bay from the corner unit that is glazed with 1/2″ Clear Tempered Glass.  The windows next to it are standard Marvin Ultimate Casements with Cardinal 272 Lowe glass.

For additional information on Marvin Windows and Doors used in Modern Design, make sure to check out Marvin’s Contemporary product brochures available on their website.  Old Town Glass, Inc. is a Marvin Window and Door dealer and licensed glazing contractor based in Novato, CA